The inn, a pretty and small welcoming place, is located at the foot of the Aranyodi hill, in the neighborhood of sloping cordons of grapes. Its front windows face the Zala valley. The once important military and trade route, which connects Zalacsány and Zalabér, goes past the building. It is not a coincidence, that the building is in this area, namely this is the place where springs arising from the core of the hill. 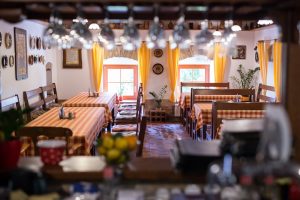 As far back as the Roman period, soldiers, travelers watered their horses here – supposedly on their way to Fenékpuszta, the Roman funded Valcum castrum. In the Turkish times the former building functioned as a horse relay-station, but unfortunately there is no trace left of the former stable. The old building, well-known by the locals, was in the possession of Szegedy Ferenc and widow Nádasdy Imréné, formerly known as Márffy Anna. It was built to be used as a customs house and was used to collect hill-duty until 1849. Thanks to the treasured fresh spring water, good quality local wines and the nearby busy road, it came natural to use it as an inn. In the 1870’s, even the infamous Savanyó Jóska often visited the house. According to a local enthusiastic researcher, Savanyó’s sister married a shepherd from Keléd, who had a vineyard on the Aranyodi hill. The outlaw from Bakony visited his sister here many times. People often brought him food from the inn or he was hiding from his persecutors right here. You can view his portrait – which we consider authentic – along with his list of sins and his accomplice on our restaurant’s wall. You can also find out that he did not commit most of the listed crimes. It turned out that other villains used his name however the law gave no mercy and put a price on his head. He was arrested in 1884 and sentenced to death then modified it to 10 years in prison.
Those who wanted to rest could quench their thirst and feast at the inn up until 1948 but after that date the house changed hands many times. Thanks to the recent continuous renovation – it was derelict and inaccessible due to overgrown weed – the house resulted in its recent form. 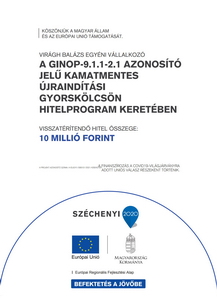